I would consider Coheed and Cambria the new kings of prog rock as they have been creating high-quality prog-rock music for the better part of 20 years. If you aren’t familiar with prog rock, well, it’s basically a heavier, more instrumental version of rock n roll usually accompanied by lyrics that tell complex stories.

Some of the big name pioneers of this genre would be bands like Pink Floyd, Rush, and Primus to name a few. There are many other acts that are pegged as prog rock (short for “progressive rock”), and any rock enthusiast can argue for days on what labels should be applied to each band.

However, for me, I can spot a “prog rock band” when I hear it. So, there isn’t much of an argument that Coheed and Cambria fit this label, and I would venture to guess that the band is pretty okay with the nomenclature.

Now, as to why these guys are the new kings, I would present to you The Amory Wars saga that lead singer/guitarist Claudio Sanchez has created as the storyline for all but one of the band’s albums.

Yes, you heard me. This band doesn’t just do concept albums. They are a “concept band” with almost all of their material centered around the same story.

This would be like if George Lucas had a band called “Luke and Leia” and all their songs were about Star Wars stories.

And this is why this band has transcended just the music of their genre. They have positioned themselves as a multimedia creative force powered by Sanchez’s constant release of new material via comic, book, music, or video formats to create deeper layers of storytelling about the narrative that drives the music.

Confused yet? Let’s get a bit more clear... 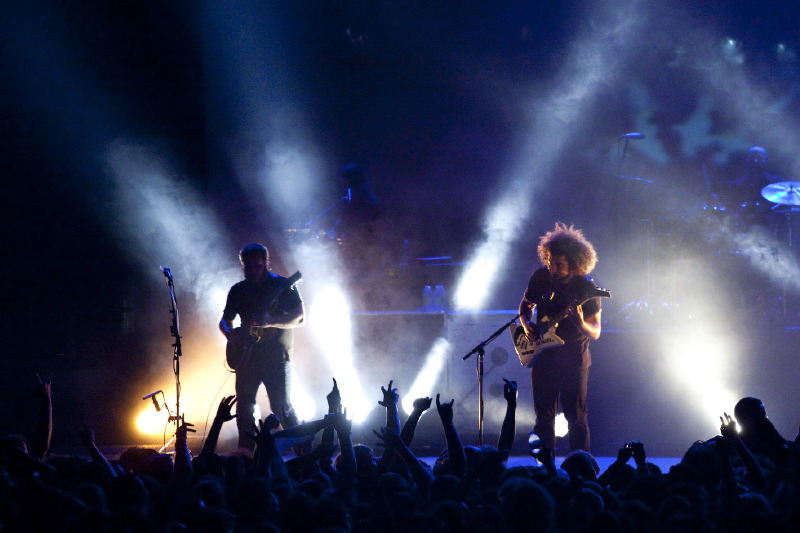 Coheed and Cambria is about as talented as a band comes when it comes to owning their instruments. Each player is individually skilled at high levels. Usually, when musical talents of this talent come together, there is a lack of ability to make music that is accessible to the masses. And while, I won’t disagree that C&C fits that to some extent, they break the mold in a lot of ways by making incredibly catchy songs since they first broke out with their single “Devil In Jersey City” from their first LP, Second Stage Turbine Blade.

Further to that concept, the songs “Favor House Atlantic” and “Blood Red Summer” are both incredibly catchy tunes as well.

Their most famous song “Welcome Home” is definitely one of the most rocking songs of all time, and had you not known that it was part of a larger conceptual universe, it wouldn’t matter at all. The song stands alone as a bad ass song.

That’s probably the best part of the songs that Coheed and Cambria put out. You don’t have to know about The Amory Wars (originally titled Bag.On.Line Adventures) to like and enjoy their music.

However, if you end up liking their music enough, you will start to put the storyline together in pieces, and it will leave you craving more and more from them in terms of how the story all really fits together.

I won’t go too much into detail about the universe that Sanchez has created outside of the music, but if you get a lot of time on your hands, you can start by checking out The Amory Wars Wikipedia page and go from there.

The guitar skills of both Sanchez and fellow lead guitarist Travis Stever are insane, and Josh Eppard on drums is a powerhouse (who also sidelines as a really good rap artist called Weerd Science). The newest bassist is Zach Cooper who is also incredibly talented as well.

This band not only makes good pop rock songs, but they can meander into 10 minute long songs, ballads, and basically pull any rabbit out of their hat that they so desire.

Not too many bands can be this creative and still make music that is enjoyable to listen to for an entire album or more. These guys do that easily, and I always get excited to dig back into their catalog when I spend time to do so.

If you are unfamiliar with this band, go check out these songs below and see if you are happy with them. Then, I would suggest to listen to their new album Vaxis I: The Unheavenly Creatures just to see if you can get into their immersive world without knowing that much about it.